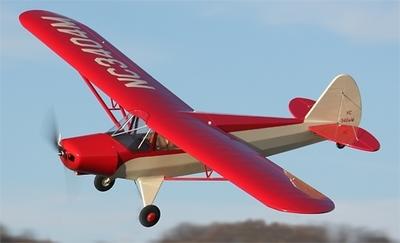 For those who love Cubs but want one a little different
106-3/8" wingspan, 67" long (without spinner), 1581 sq. in. wing area, 15-1/2 pounds (electric version). All built up conventional balsa and plywood construction with the emphasis on scale looks and light weight.
Wings have scale rib spacing and are pre-built and covered. Scale wing struts and jury struts are included as well as the scale covers for the ends of the struts. The cowl is a pre-finished fiberglass unit with hinge and panel lines molded in. All covering is genuine Oracover beautifully pre-installed.
All flying surfaces are pre-slotted for the included hinges. Extensive hardware pack with quality clevises and control horns provided. Can be built either as an electric model or with a gas engine. It doesn't need a lot of power to fly beautifully. Ours is powered by an AXI 5320/28 on only 8-cells and flies for 15-25 minutes on 6000 mAh.
Wings are removable for transport. The big PA-12 has all the docile flight character that makes Cubs so popular. The ground handling is solid and its presence in the air is uncanny. On final approach it's easy to mistake it for its full size brother.

Piper PA-12
Introduction and History
The end of World War II saw the resumption of private aircraft manufacture and the Piper Aircraft Company, already well known for the J-3 Cub and the J-5 Cruiser, began production of improved models of these aircraft. These were the Piper PA-11 Cub Special and the Piper PA-12 Super Cruiser. Walter Jamoneau, who was head of the engineering department at Piper for many years, modified the J-5 into the PA-12. Test flights were made in December 1945, and the first production version of the aircraft appeared in February 1946.
The original J-5 series were fabric-covered, three-place, high-wing monoplanes, initially powered by 75-hp Lycoming engines, and later by 90-hp Lycomings. The PA-12 was also fabric-covered, over a welded metal tubular frame and wooden wing spars, and featured a Lycoming O-235-C engine, fully cowled. Later models of the PA-12 had as optional equipment a slightly more powerful engine. Standard features on the PA-12 included an electric starter, navigation lights, and a cabin heater. The Piper PA-12 Super Cruiser was used in a number of roles, from private pleasure flying to light cargo carrying and many are still flying. It was also successful in the export market.
Specifications for Full Scale Piper PA-12 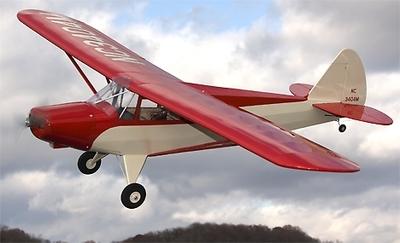 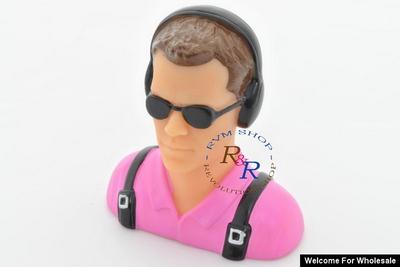 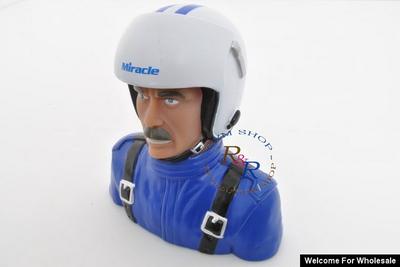