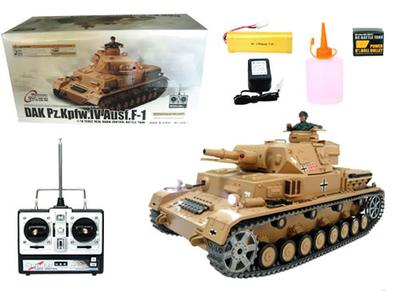 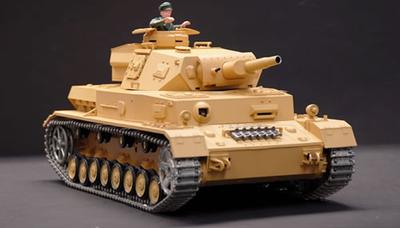 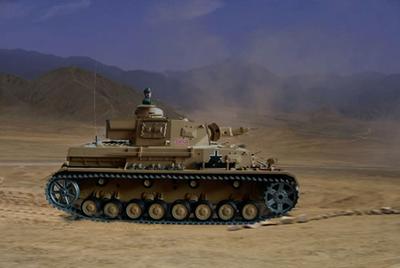 The German Afrikakorps that used this version of the Panzer was the expeditionary force in Libya and Tunisia during the North African Campaign of WW II. The rc tank can go forward and backward at two different speeds and the real working tracks mean it can be rotated any way. This pro version has been upgraded with metal parts making it more reliable.

The German Afrikakorps (German: Deutsches Afrikakorps or DAK) that used this version of the Panzer tank was the German expeditionary force in Libya and Tunisia during the North African Campaign of World War II. The force was kept as a distinct formation and became the main German contribution to Panzer Army Africa which evolved into the German-Italian Panzer Army. In April 1941 production of the Panzer IV Ausf. F started. It featured 50-millimetre single-plate armor on the turret and hull and a further increase in side armor to 30 millimetres. The weight of the vehicle was now 22.3 tonnes, which required a corresponding modification of track width from 380 to 400 millimetres to reduce ground pressure. The wider tracks also facilitated the fitting of ice sprags, and the rear idler wheel and front sprocket were modified. A total of 464 Ausf. Fs were produced from April 1941 to March 1942.
This fantastic scale radio controlled replica from Heng Long, finished in the DAK colours and design, looks great and is feature packed. The highly detailed finish adds to the realism and the included commander figure completes the model perfectly. The tank fires plastic bbs and is the pro version with metal tracks and parts, a built in real smoke generator and sound effects. Sound effects include emulation music, motor start-up, engine, machine-gun and cannonball when it fires a bb.
All functions of the rc tank are controlled from the included transmitter. The tank can go forward and backward at two different speeds and the real working tracks mean it can be rotated any way. The turret is also fully controllable and can be rotated as well as moving the gun up and down. The tank has working suspension for climbing over objects and up hills. The pro version has also been upgraded with a metal gearbox making it more powerful and reliable.