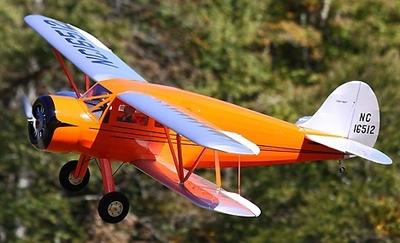 Our airplane has a 100” wingspan and is 74” long with a 2496 sq. in. wing area (that’s over 17 sq. ft. of wing area). At 20-22 lbs. flying weight, it has a low wing loading typical of a Waco. We included lots of scale detail to bring the model to life: corrugated ailerons, working doors, scale aluminum wheel hubs, airfoiled aluminum wing struts, scale rib spacing and scale outline and colors., *Note:, The two HUGE boxes that this product comes in makes it an Oversize Shipment that has to be delivered by Truck Freight. The additional shipping charge is $250.00. This product is NOT available for shipment outside of the United States and Canada., Technical Specifications:, Length:, 74", Wingspan:, 100", Flying Weight:, 20 - 22 lbs., Controls:, Ailerons, Elevator, Rudder, Throttle, Wing Area:, 2496 sq. in.,

Big scale Golden Age biplane
WACO (Weaver Aircraft Company) of Loraine, Ohio was one of the premier aircraft manufacturers of the Golden Age. The YKS-6 was a large cabin biplane with seating for 4-5 people. Its large wing area and overall light weight allowed it take off and land in undeveloped areas common to the US in the 1930’s. Our model is of the airplane that is owned by the Deutsches Museum Flugwerft Schleißheim. This airplane was originally built as an ambulance aircraft in 1936 and spent the bulk of it service life on floats in the Alaska outback. Restored in 1989 the plane was later shipped to Germany and is still in flying condition with its original registration numbers. Hobby Lobby stocks
spare parts
for 1/4 Scale Waco.

J. W. Johnson's
Madien Flight Video
of the Pilot-1 Waco YKS-6 1/4 Scale
Pilot-1 Waco YKS-6 1/4 Scale
Powered with a Gas Engine
All laser cut plywood construction, the airplane comes in 2 large boxes with a great deal of the tough work already done. The main parts are pre-assembled and covered with the graphics pre-applied. The wings are easily removed without disassembly; there is no rigging to deal with. Battery access is through the operable doors on both sides of the fuselage. Total build time is about 15-20 hours. Complete hardware package included.
Whether built as an electric or gas model the flight performance is a total joy, take offs are short and climb performance is quick. The airplane will slip into a small field just like the original full scale one did. Our recommended electrical setup provides much greater than scale performance, we rarely get above half throttle. Flight duration with a 5000mAh battery is well over 10 minutes with reserve. Airplane can be flown with 10 or 12 lipoly cells and balances with the batteries inside the fuselage.
Pilot-1 Waco YKS-6 PDF Instruction Manual

History of the Orange and Silver WACO YKS-6
The YKS-6 on display at the German Air Museum was built as an ambulance aircraft in 1936. After its delivery it was in service in Alaska until 1989, primarily with Anchorage as its base. Up until 1969, it had floats instead of landing gear. In the inaccessible lake areas of Alaska, it served for the recovery of victims from accidents and for the transport of patients. In the back of the fuselage, one person can be accommodated on a stretcher.
The YKS-6 is appreciated by pilots as a reliable and stable plane and it has proved its excellent efficiency in the rough Alaskan climate with ice, snow and extreme cold. In 1989, a full restoration of the airplane was carried out. In April 1997, the restored plane was ferried from Las Vegas, Nevada, across the American continent to Stinnes International Airport in Mississippi by the pilots Walter Eichhorn and Marwig Herzog, in 18 flight hours. In Mississippi it was disassembled and shipped to Germany in a container. The plane on display is airworthy and still registered today with its original aircraft identification mark NC 16512. 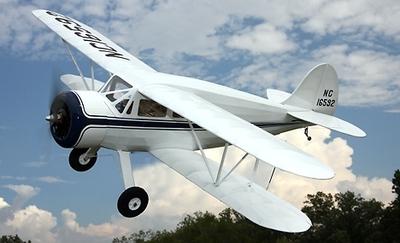