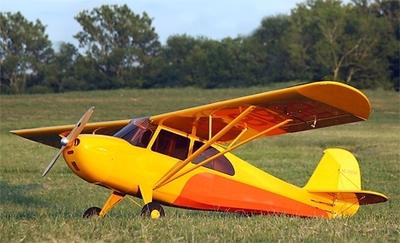 Golden Age style in a modern laser-cut ARF
105" wingspan, 65" long, 1542 sq. in. wing area, ready to fly weight is 15-1/2 pounds (electric). With over 10,000 Champs built between 1944-1951 it was one of civil aviations great hits. Thousands of men and women learned to fly in a Champ and came to love it's easy flying characteristics.
Faithful to its roots the Pilot-1 Quarter Scale Champ is an easy to fly, easy to fall in love with model. Construction is all built up laser cut wood. All outlines are scale and the wing has scale wing rib spacing. The airplane can be built with electric power or as a 1.20 glow or 23cc gas model. With almost 11 sq. ft. of wing area, the Champ has a light wing loading and very good manners, from taxi out to touch down. The entire airframe is covered in genuine Oracover. Wings and struts are easily removed for transport and storage. Cowl is epoxy fiberglass, pre-painted to match the covering. Battery access is through a hatch on the underside of the nose; landing gear is pre-assembled heavy-duty wire unit, ready to bolt into place.

Aeronca Champion
Introduction and History
The full-scale Aeronca Champion, or "Champ", was manufactured by the Aeronca Aircraft Corporation, in Middletown, Ohio between 1944 and 1951. Over 10,000 were built. In 1946, it was marketed as "the newest in aerodynamic design! It's the easiest plane you've ever flown." Like the Piper Cub with which it competed, the Champ also featured tandem seating. While the Piper Cub is soloed from the rear seat, the Champ can be soloed from the front seat, giving improved forward visibility on the ground, and during takeoffs, climbs, landings. Although the Aeronca Champ has a wider cabin than the Piper Cub, the Champ's cruise speed was about 15mph faster. Its Continental 65hp engine powered it to a top speed of 100 mph. 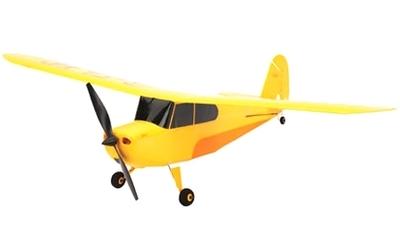